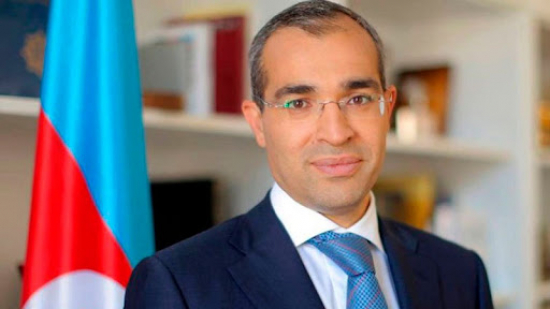 The President of Turkmenistan received the Minister of Economy of Azerbaijan

Expressing gratitude to the head of state for the time allotted for the meeting, the guest highly appreciated the modern achievements of Turkmenistan, which is confidently following the path of progress and prosperity and has achieved great international authority.

Welcoming the head of the Ministry of Economy of the brotherly country, President Gurbanguly Berdimuhamedov stressed that Turkmenistan intends to continue making efforts aimed at enhancing the traditions of good-neighborliness, as well as fruitful cooperation across its entire spectrum.

As noted, the consistent implementation of agreements reached at the highest and intergovernmental levels, as well as regular meetings of representatives of ministries and departments, business circles, participation in large-scale joint forums, directly serve to strengthen the Turkmen-Azerbaijani dialogue, built on the principles of equality and mutually respectful cooperation. ...

Jabbarov Mikail Chingiz oglu also noted that the good personal relations established between the leaders of the two countries also give grounds for optimistic forecasts regarding the further strengthening of interstate relations.

Special emphasis was placed on the importance of building up cooperation in the energy sector. Turkmenistan and Azerbaijan, President Gurbanguly Berdimuhamedov noted, are self-sufficient states rich in hydrocarbon resources and advocate diversification of their supplies to world markets on a parity basis, taking into account the interests of producers, transit countries and consumers. In this context, the intention was expressed in further joint development and implementation of energy projects to ensure energy security in the region, as well as improve the well-being of the peoples of the two countries.

The head of Turkmenistan noted the need to take joint measures in order to make wider use of the potential of both states for the successful implementation of projects to form new transport corridors.

As it was emphasized, this direction is one of the key vectors of interstate interaction. This is confirmed by the increase in the volume of transit cargo both from Turkmenistan to Azerbaijan and from Azerbaijan to Turkmenistan. In this regard, it was stated that the ongoing working meetings, consultations with the involvement of the relevant transport organizations of the two countries will contribute to further building up partnerships in this sector.

At the end of the meeting, expressing firm confidence in the successful continuation of the traditional relations of brotherhood and good neighborliness, the Minister of Economy of the Republic of Azerbaijan wished President Gurbanguly Berdimuhamedov and the entire Turkmen people further prosperity and new impressive successes on the path of fundamental reforms and transformations.